Jan Brueghel the Younger’s Allegory upon the Tulip Mania

In the article A Second Tulip Mania in Prospect magazine this month, Ben Lewis and Jonathan Ford compare the contemporary art market of the past five years to the legendary tulipomania of 17th century Holland, when a single bulb sold for 40 times an average annual salary. They write:

The bubble in contemporary art is about to pop. It has exhibited all the classic features of the South Sea bubble of 1720 or the tulip madness of the 1630s. It has been the bubble of bubbles—balancing precariously on top of other now-burst bubbles in credit, housing and commodities—and inflating more dramatically than all of them. While British house prices took six years to double at the start of this century, contemporary art managed it in just one, 2006-07. […] Contemporary art in the emerging economies did even better. The value of its sales in China increased by 983% in one year (2005-06). In Russia they rose 2,365% in five years (2000-05), while its stock market increased by “only” about 300%.

—
In case you skimmed that, I’ll repeat: Contemporary art sales increased over two-thousand percent in Russia in five years. Mania might be an understatement.
In the winter of 1636-37, ownership of tulips bulbs sometimes changed hands up to 10 times a day. But then the crash came from a single ill-fated auction in Haarlem, when the precious bulbs failed to fetch their running price. Panic spread throughout the lowlands, and the market instantly evaporated.Of course, it didn’t take long for the whole folly to attract acid-tongued satirists. Writing about his painting above, Brueghel explains what the monkeys are doing:

“Two dozen simian florists are portrayed indulging in all the rituals of the bulb trade. One points at some flowering tulips; another holds up a flower in one paw and a bag of money in the other. Behind them, a group of monkeys fight over who should pay for the now-worthless bulbs, and one speculator is carried to an early grave. On the right-hand side of the picture, a pair of apes share one of the florists’ traditional banquets while another is hauled before a magistrate for defaulting on his debts. In one corner a particularly disgruntled monkey urinates on a flower bed full of tulip bulbs.”

It’s rather interesting exercise to substitute the words “bulb” and “tulip,” for art—explains our current situation pretty accurately. Here is my attempt:

Two dozen dealers and collectors are portrayed indulging in all the rituals of the artworld. One points at some paintings; another holds up a sculpture in one hand and a bag of hedge funds in the other. Behind them a group of museum trustees are fighting over who should pay for the now-worthless Damien Hirsts, and one speculator is carried to an early grave. On the right-hand side, a pair of Russian millionaires share a Francis Bacon while another is hauled before court for defaulting on his debts. In one corner, a particularly disgruntled former-Lehman Brothers CEO urinates on a pile of recent Chinese pop art.

—
That was satisfying. But the art critics can’t be entirely let off the hook. So to book-end this post with more simians, here is Monkeys as Judges of Art, 1889, by Gabriel Cornelius von Max 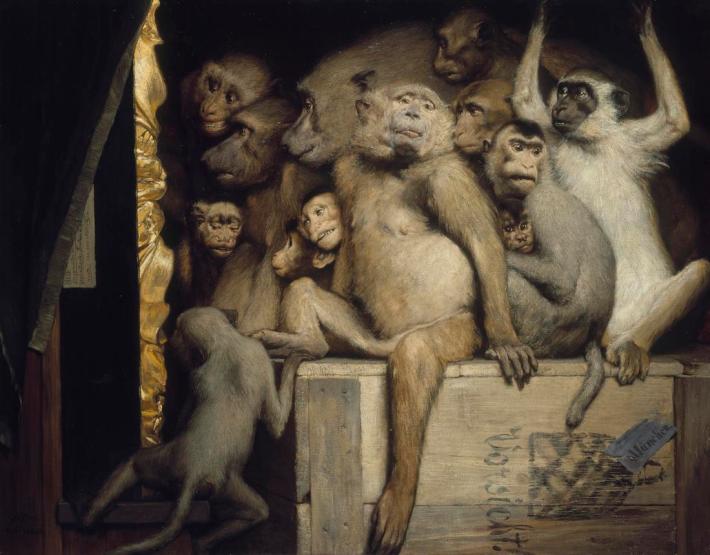