Nostalgia for the Future/Future of Nostalgia

By Lyra / September 21, 2010 / architecture, art, design, los angeles, memory, modernism, monuments, reviews / One comment
The Future of the Past: The World Trade Center Memorial and the Politics of Memory, surveys monuments to major political and national events, tracing their arc from triumphant and chauvinistic to melancholic and contrite. It sits unpublished on my bookshelf in severe black hardcover binding.

Above is Deborah Aschheim’s lovely drawing of the Theme Building at LAX airport, part of her show “Nostalgia for the Future” at Edward Cella Art + Architecture gallery. The title of the show made me think of Svetlana Boym’s book on post-Soviet memory, The Future of Nostalgia, as well as my own masters thesis title from 2005, The Future of the Past, which dealt with monuments as receptacles for memory.

All of these titles might be a bit romantic, especially when seen together, but they are all basically accurate. Aschheim’s drawings speak of a nostalgia for when mid-century modernist buildings were first erected, full of promise and futuristic spirit, heralding a new world of clean geometries, sensuous curves, and light-filled space.

Boym’s book is an intellectual history of nostalgia, examining its roots as a perceived malady, then situating it in post-Communist cities as a pervasive condition of remembering things as-they-were, and finally looking to exilic literature and art for strains of longing and remembrance before asking what nostalgia will look like in the future, when it will be (isn’t it already?) manufactured for us.
But back to the image….please visit John Crosse’s fantastic site on Southern California Architectural History, where he has a fascinating post about Aschheim’s work and the history of the Theme Building. Random google searches have brought me to his website multiple times and I thank him for gathering and sharing his archive and his thoughts.
Hail the amateur academic!
My short review of Aschheim’s show was published at Artforum.com. 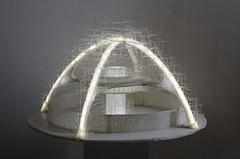 The sketchy drawing Chandler No. 2 (Mom in Front of Buildings You Can’t See Anymore, Los Angeles, 1968), 2010, depicts a woman on a city sidewalk wearing sunglasses, the curve of a pale midcentury building arcing behind her. The title makes you look twice, ushering in an air of obsolescence that haunts many of the nearly four dozen ink on Dura-Lar drawings by the Los Angeles–based artist Deborah Aschheim in her latest exhibition, “Nostalgia for the Future.” Made between 2009 and 2010, the works in this show pay homage to the futuristic symbolism and ironic, but inescapable, aging (or destruction) of modern architecture.

Iconic Los Angeles buildings such as the airy Theme Building at LAX airport or the Capitol Records stack in Hollywood, as well as a few drawings from structures at the 1964 World’s Fair in New York, are depicted in multiple views, as Aschheim homes in on “modern” details like concrete honeycombed windows or balconies gridded across a concave facade. Stylistically resembling the loose assertive strokes of architectural elevation sketches (Richard Neutra and John Lautner come to mind), Aschheim’s new output also evokes nostalgia for the beauty of architectural renderings from a predigital age.

In some of the most poignant drawings, buildings are shown covered in a delicate cloud of scaffolding, conjuring a moment when the modern was truly nascent. The Theme Building (which was recently renovated) is also represented in Encounter, 2009, a sculpture of waxlike white plastic. Spectrally lit from within, and veiled with icy clear scaffolding, it resembles a spaceship—becoming futuristic and surreal once again.